ONLY TAKING 12 SKATERS PER AGE DIVISION 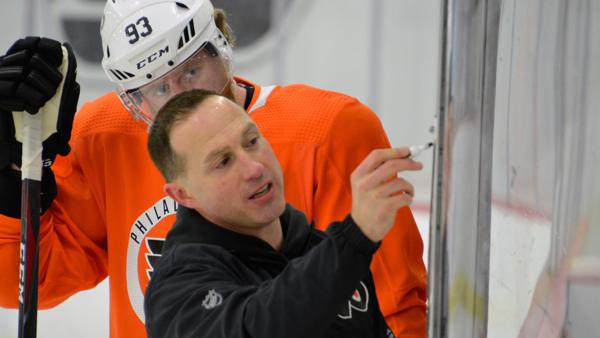 Formally with the Buffalo Sabres Angelo Ricci is now a full time Skills Coach with the Philadelphia Flyers. In addition to his NHL commitments Angelo is the Founder, Head Instructor, and Consultant for Ricci Hockey Consulting.  Ricci is a skills and stickhandling coach with over 20 years of experience.   Angelo conducts and oversees over 40 programs year-round which develops over 1000 players each year.  Sean Skinner and Angelo Ricci partnered up and developed Stick with the Edge and Ricci has consulted and worked with numerous professional and elite players such as Zach Parise, Scott Parker, Gilbert Brule, Brock Bradford, Drayson Bowman, Nick Shore and Drew Shore plus numerous NHL players, NHL Draft picks (NHL First Rounders included) and Division 1 College players. Angelo has also consulted and worked with IMG and Octagon Sports on player development. For the past eight years, Angelo has been a skills consultant for the Assabet Valley Girls program that has won 39 USA Hockey Tier I National Championships.  He was Head Skills Instructor at the NHL Fantasy Skills Camp during the NHL All-Star Games in Denver in 2001 and Los Angeles in 2002.

In conjunction with his teaching and consulting, Angelo shares his passion, skill and knowledge as a USA Hockey Coaching Education Program Presenter (’99-present) and as a USA Hockey District Festival Head Coach (’04-’09).  He has been a guest lecturer or presenter at over 75 coaching seminars and clinics.  In 2003, Ricci attained his certification with USA Hockey as a Master Level 5 Coach.  Angelo has been a Director of Hockey and Coach Development for the past 14 years with Arvada, Arapahoe and Littleton.  Ricci is currently the Director of Hockey Operations for the Colorado Thunderbirds which is a nationally recognized elite AAA hockey program.  He has also coached at the High School/AAA level for 10 seasons with Team Colorado, Team Colorado Outlaws and Colorado Thunderbirds.

Develop your Stick Handling skills with a professional skills Coach this summer.